Top bars don’t need to be tiny you know. Check out this one.

CoolSculpting VS Clatuu: Which Fat Freezing Device is Best? 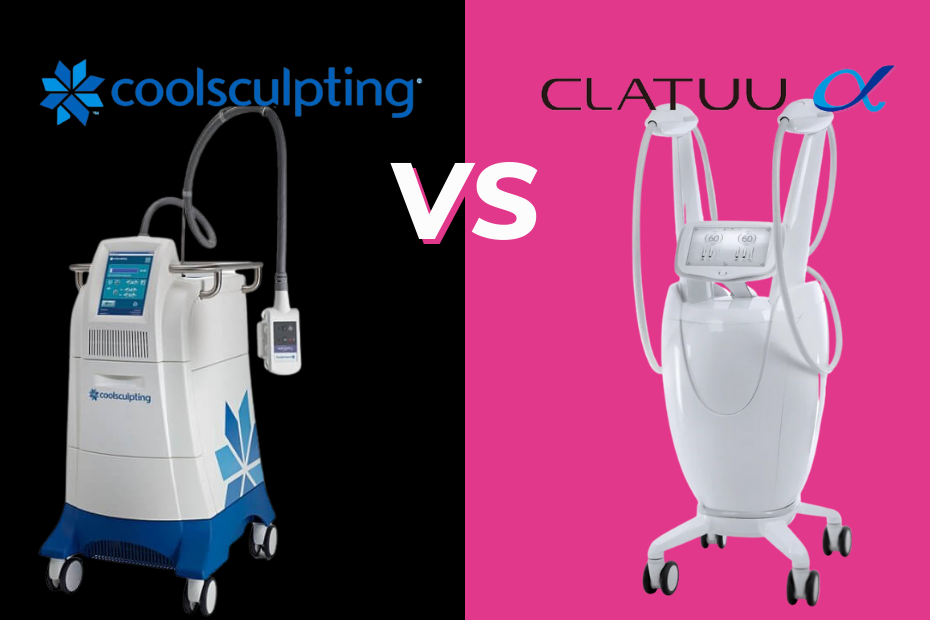 Considering Fat Freezing in London? Fat cells can be extremely stubborn. We’re talking months of strict dieting and exercising kind of stubborn. And while you may have stumbled across recommendations for liposuction and other fat-removing surgeries, there’s a safer alternative that’s just as effective, virtually painless, and requires no downtime.

It almost sounds too good to be true, doesn’t it? But the keyword is almost. Behold cryolipolysis, otherwise known as a non-surgical fat freezing treatment. When choosing a fat freezing treatment, we’re often given the choice ofCoolSculpting or Clatuu devices, but it can be hard to determine which one is the better option. PSA if it’s not one of these two, avoid like the plague! There are many rip off devices on the market that will promise the world and you’ll be left sorely disappointed. CoolSculpting is the Mercedes and Clatuu is the RollsRoyce so why choose a Skoda?

We’re here to give you the lowdown on both devices including what they are, how they’re performed and their pros and cons so you can find out once and for all which is the superior device (spoiler alert: in our opinion it’s the Clatuu).

But before we get into it, it’s important to mention that both of these treatments are most suitable for those who are not far away from their ideal weight and whose skin is still elastic and in good health. Fat freezing (cryolipolysis) is for targeting those stubborn fat pockets that a healthy lifestyle and exercise just aren't attacking. Sometimes we need a little extra help, but it won’t do all the hard work for you. Those weights aren’t going to lift themselves.

As its name suggests, CoolSculpting is a non-invasive body sculpting procedure that freezes away unwanted fat bulges. It literally freezes targeted areas of fat cells and prevents them from coming back by removing them from the body as wastage.

It’s time to throw it back to the early 2000s, when a couple of researchers from Harvard began examining old medical literature about paediatric patients who had shown a decrease in cheek fat after having regular ice lollies. The findings suggested that the extreme cold didn't kill off skin cells, but it was effective at killing fat cells. This is because fat cells are destroyed at warmer temperatures than other cells and tissue found in the body. Subsequently they developed the CoolScuplting, fat freezing procedure which was approved by the US FDA in 2010.

How is CoolSculpting Performed?

CoolSculpting uses a cold applicator that cools the isolated area to temperatures that are cool enough to target the fat cells without damaging the skin. The CoolSculpting applicator comes in a variety of different shapes and sizes, depending on the area you're targeting and will be placed over a gel pad for a barrier between the device and your skin.

That area of the body is then kept at the required temperature for about 35 minutes to an hour—depending on the area—allowing the fat cells to crystallise, rupture, and die off. The cooled tissue is then massaged for several minutes to help break up the fat cells even further. Over the next 6-12 weeks, the dead fat cells will be processed through the body's lymphatic system and flushed out as wastage. On average, a CoolSculpting procedure will reduce fat cells by 20 to 25%.

The Pros of CoolSculpting

CoolSculpting has 9-FDA cleared treatment areas including, under the chin and jawline, thigh, belly, flank, bra line, back, underneath the bum, and upper arm. The treatment is suitable for men and women alike.

One advantage of CoolSculpting is that it offers a non-invasive fat reduction option for those areas of fat that are resistant to diet or exercise. But as you'll see, Clatuu also offers a similar non-invasive treatment for targeted fat loss.

Because CoolSculpting is a quick, non-invasive treatment, it requires little to no downtime.

The Cons of CoolSculpting

Although there's no risk of getting frostbite from fat freezing technology, you can experience temporary swelling, bruising, numbness, and skin sensitivity after CoolSculpting. It's can also be common for treated areas to feel tingly up to 2 weeks following the treatment.

It’s pretty uncommon for clients to have just one round of CoolSculpting. Female clients especially find that 2 to 3 rounds of treatment are where they begin to see the results they desire. Unless your chosen clinic has two CoolSculpting machines, CoolScuplting typically can only treat one area at a time (i.e. one love handle), subsequently you’ll have to undergo more sessions which means you’ll be feeling a little chilly for longer.

CoolSculpting is owned by a parent company that charges a licensing fee for practitioners to use it in their clinics. This fee raises costs for the practitioner which is reflected in the price of the treatment. One CoolSculpting session can cost on average anywhere from several hundred to thousands of pounds. Because most patients need more than one session to get the results they want, the cost quickly racks up and before you know it, you’re left with a huge bill at the end.

What is Clatuu Alpha Fat Freezing?

Like CoolSculpting, Clatuu Alpha is a non-invasive treatment that freezes and destroys fat cells without causing damage to the skin and other tissues. Though similar, Clatuu is a newer treatment technology (introduced in 2015) that offers a more modern and effective fat freezing technique than CoolSculpting.

Clatuu uses 360-degree applicators that can cool and freeze cells more quickly and evenly, boosting the effectiveness of fat removal by 18%. Each cooling applicator is designed to freeze a significant portion of a patient's subcutaneous fat layer and adjust according to the thickness of the fat layer.

Similarly to CoolSculpting, the cooling process induces the death of the fat cells that are then naturally released from the body over 6-12 weeks. After one treatment, the fat deposits significantly shrink in size. On average, the area's size will reduce by 1 inch after just one session. You will see a 20-30% permanent reduction in stubborn fat.

The treatment is relatively comfortable and painless. As the cooling process starts, you may feel a slight stinging sensation which will fade within the first ten minutes.Treatments typically take 40 minutes to an hour in length, depending on the size and thickness of the targeted area. After the treatment and like CoolScuplting, you’ll receive a gentle massage to help break up fat cells.

The Pros of Clatuu Alpha Cryolipolysis

LikeCoolSculpting, Clatuu is non-invasive and requires no downtime, so you can quickly get back to everyday life or go right back to work if you did this on your lunch break (hey, we're not judging).

Clatuu's applicators come in various shapes and sizes designed to accommodate various body types, fat thickness, and areas of concern so you can tailor and target your treatment to fit your body and specific goals. This is a pretty big pro, considering that each and every body is different and we rarely see individualised treatments with standard devices. Because it's personalised, the treatment is suitable for both men and women.

Clatuu's revolutionary 360-degree cooling applicators get to work quicker and can more effectively cool the area's fat cells, leaving the body with 25% less fat than seen with CoolSculpting. Clatuu has a faster cooling speed which is able to freeze fat cells 30% faster than other devices, so you can spend less time getting the treatment done and more time doing what you love.

Clatuu is a more cost-effective option than CoolSculpting for two reasons. For one, Clatuu utilises dual applicators that can target more than one area at a time (i.e. both love handles at once), getting the effect of two treatments in the time it takes to do one. This saves you time and money.

Clatuu is able to be offered at a more affordable price because the device itself doesn’t require practitioners to purchase a license and the extra fees associated with licensing the product out. This lowers the cost of the treatment for both practitioners and customers alike.

In comparison to CoolSculpting, Clatuu offers more treatment areas with special applicators that target specific areas such as behind the legs, inner and outer thighs, bra line, upper arms, and more. Clatuu also now offers applicators small enough to contour the face and target difficult areas like underneath the chin.

In our eyes, the Clatuu device doesn't have many cons when compared to CoolSculpting (the only other fat freezing machine we'd ever recommend you contemplate) —it's more effective, affordable, and individualised. But there are a few minor (possible) side effects to mention. Some clients have experienced slight bruising or numbness after the treatment. However, these symptoms naturally resolve within a few days or weeks at the longest.

Why Have We Chosen Clatuu Over CoolSculpting at Young LDN?

Before choosing a fat-freezing device for Young LDN, we considered all of the ways in which you would be affected by using and paying for this treatment. We know that when considering any aesthetic treatment, downtime and associated costs are enormous considerations and ones that shouldn't be taken lightly. That's why we've chosen Clatuu.

Clatuu is the market leader when it comes to fat freezing, so we’re confident you’re getting the best of the best. Not only is Clatuu the most effective, safe, quick, and cost-effective body contouring treatment option, but the results are undeniable.

Discover the dramatic results for yourself and book fat freezing at Young LDN today. 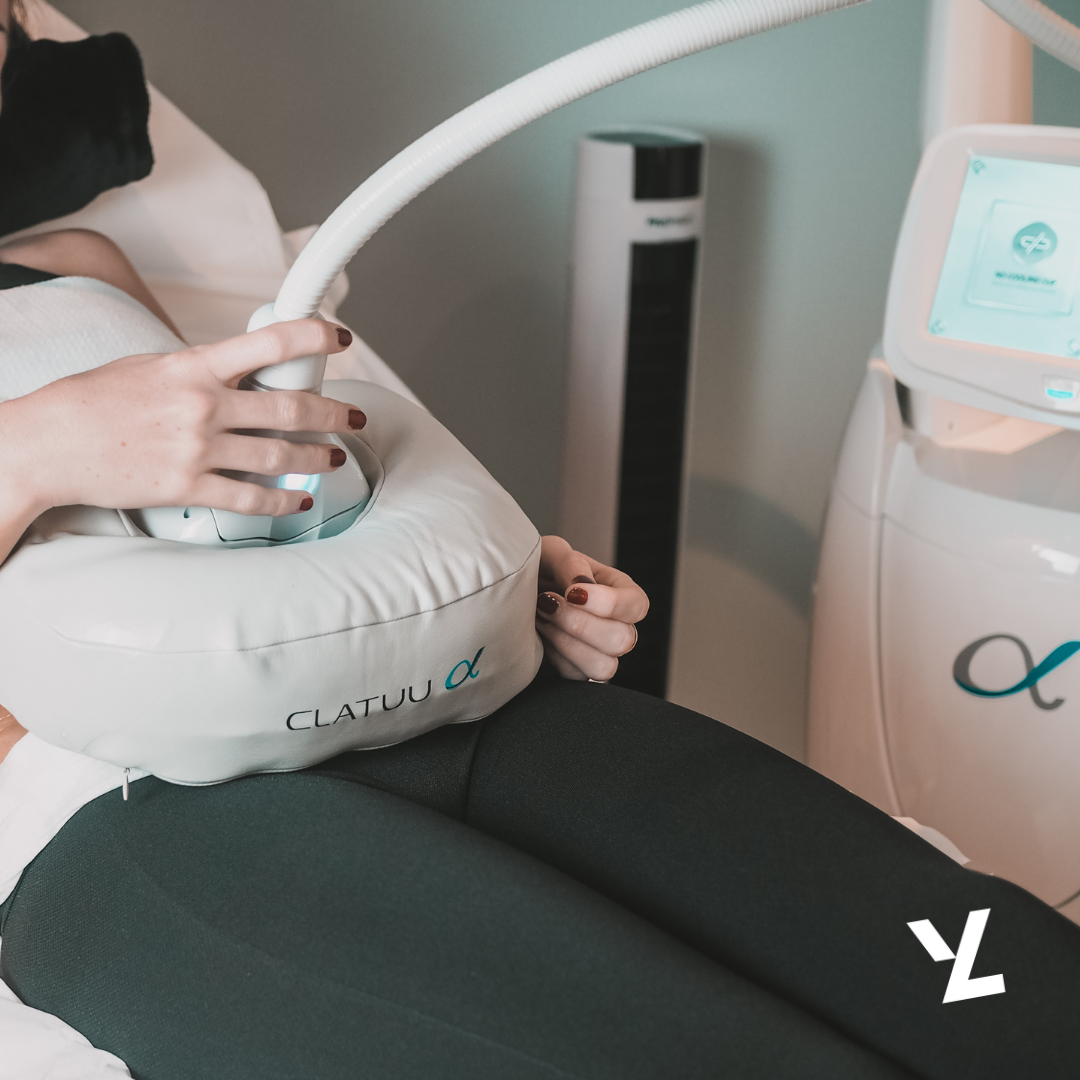 Fat freezing treatments 101: everything you need to know

Sign up for exclusive offers, new launches and tips from our tribe

Thank you! Your submission has been received!
Oops! Something went wrong while submitting the form.
© 2020 YoungLDN All Rights Reserved
• Website by off brand. •