Top bars don’t need to be tiny you know. Check out this one.

Is Laser Tattoo Removal for Me? 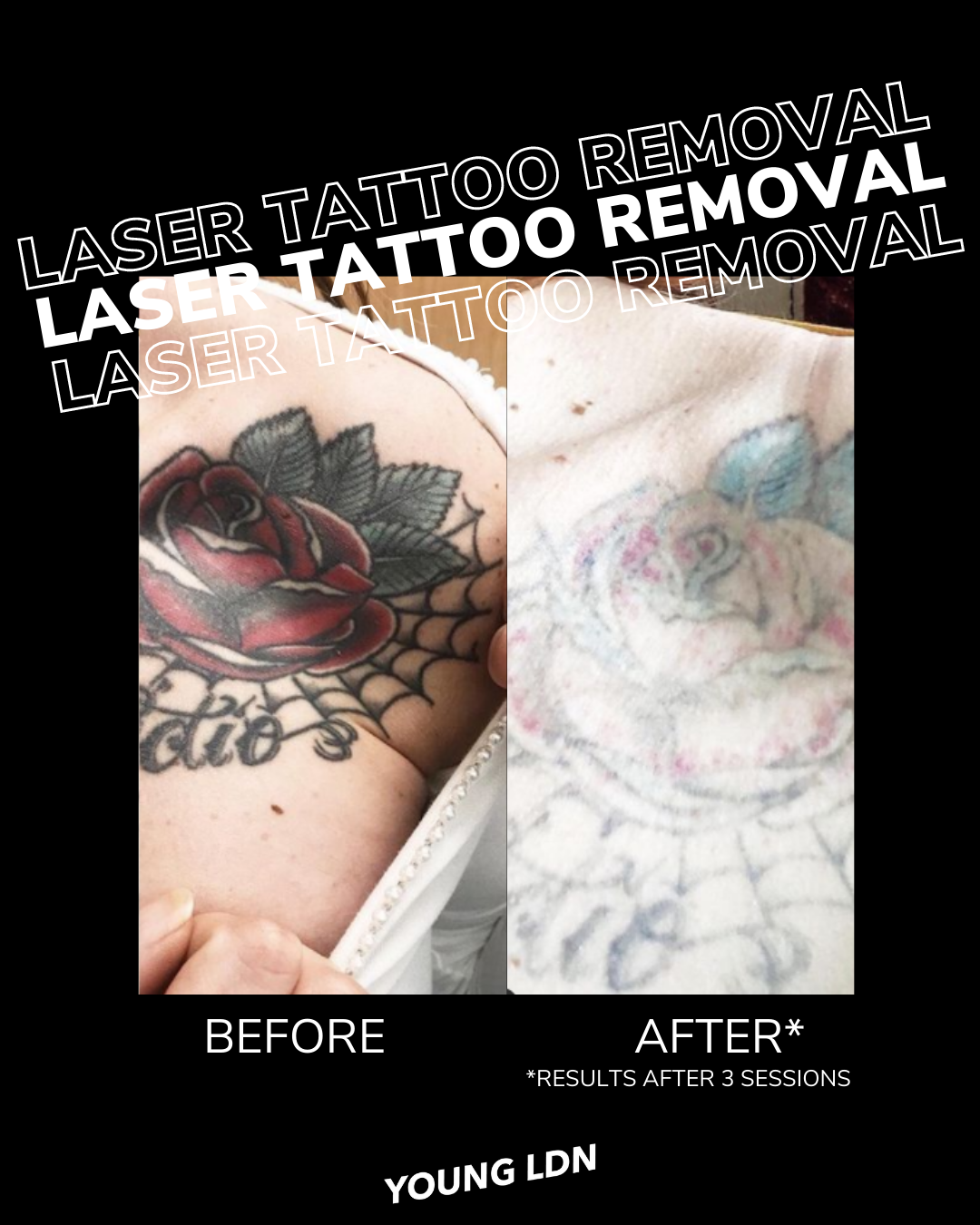 So, you’ve woken up one day and started to regret a tattoo you thought was a good idea. Whether it was a drunken mistake that left you with more than a hangover, or an ex’s initials, laser tattoo removal will help you to forget all about your ex (you probably don’t need help with the boozy night out). But we know that you want to make your next move with caution, so we’re here to tell you everything you need to know about laser tattoo removal to go in with confidence.

How Does Laser Tattoo Removal Work?

You’re probably wondering how something ‘permanent’ can be removed. Well, tattoos actually begin to fade over time as the body’s immune system tries to remove the ink particles as they’re recognised as a foreign substance, (but you might have missed this information while you were drunk on love, or just drunk).

The laser tattoo removal process works by speeding up the natural process with pulses of light energy that penetrate the skin and then absorbed by the tattoo ink. Once the tattoo ink holds onto the light energy, it begins to heat up and eventually overheats and shatters into smaller fragments. The laser tattoo removal process involves going over these fragments until they’re virtually non-existent with the help of the immune system flushing out the broken ink particles.

How Effective Is Laser Tattoo Removal?

Laser tattoo removal is the most effective way to get rid of unwanted tattoos. It’s a safe, non-invasive treatment that will only affect the tattoo, leaving the surrounding skin out of harm’s way.

How Long After Laser Tattoo Removal Will a Tattoo Fade?

Before starting your laser tattoo removal journey, it’s important to be aware of the time frame. If you’re hoping to lose an embarrassing tattoo before a hot date in a couple of weeks, you should work on owning it. But if you’re lucky enough to have found your soul mate already, but still want to get rid of your tattoo before your wedding in a year or two, laser tattoo removal can help.

The laser tattoo removal process takes so long because tattoo ink is inserted into the deepest layers of skin, so the light energy is absorbed by the shallowest layers of link first. This means it needs to remove several layers of tattoo ink before reaching the last layer, and with a recommended schedule of 2-3 months apart to allow the skin to heal and the body to break down the tattoo ink, it can take a while.

What Does a Tattoo Look Like After Laser Removal?

It’s tricky to envision your skin before and after laser tattoo removal as results vary from person to person. Although, most patients can restore the skin to its pre-tattoo appearance. However, there are some people who won’t respond as well to the treatment and be left with fragments of tattoo ink in the skin, but this may be enough for you if you’re desperate to remove your tattoo or planning to tattoo over the area - just make sure you won’t regret it again!

Laser tattoo removal results will depend on how well your body is able to flush the fragments out, colours used for the tattoo, surface area and how long you’ve had it for – older tattoos will already have begun to fade, making them easier to remove.

In general, darker colours can attract more light energy and break up more efficiently. Whereas lighter colours, especially pastel colours, are harder to remove as they use a combination of white ink which reflects the laser light.

Laser tattoo removal will cause some pain and discomfort, but since you’ve sat through getting the tattoo in the first place, you can 100% stomach getting it removed. Most patients describe laser tattoo removal as a stinging-like pain, exactly how you would imagine being zapped by a laser would feel. However, a cooling method is used to relieve pain throughout the treatment.

For some, the laser tattoo removal healing process may also involve discomfort as the treatment area can blister and become inflamed, much like when you first had your tattoo done.

How Many Sessions of Laser Tattoo Removal Will I Need?

Laser tattoo removal is highly unlikely to cause scars when performed by a professional, but if the tattoo caused scarring whilst it was being applied and/or healing (if you picked the scabs), these scars will remain. Many people aren’t aware of any scars caused by the tattoo as the tattoo covers them up, so after laser tattoo removal, light scars may be discovered once the tattoo begins to fade.

The biggest, most important rule is to avoid picking scars. Not only will this increase the chances of scaring, but it’ll also make you vulnerable to infections. The rest of laser tattoo removal aftercare is simple, and a lot less tempting to go against.

For the first few days after the treatment, keep the area clean and dry. The skin after laser tattoo removal will require a daily recovery balm throughout the 2-3 months between sessions.

To no longer have your regretful tattoo staring you down, book laser tattoo removal with Young LDN today.

Sign up for exclusive offers, new launches and tips from our tribe

Thank you! Your submission has been received!
Oops! Something went wrong while submitting the form.
© 2020 YoungLDN All Rights Reserved
• Website by off brand. •